If you fall into definition 1 because you “produce” rap or dubstep on your laptop, you are not a fucking producer. A baker doesn’t “produce” bread, he makes it. Unless your job is overseeing a musical project and determining the overall direction of the sound, you should consider yourself lucky if they call you a DJ (I wouldn’t if you can’t live mix). “That’s not fair, by creating these beats I am creating the direction I want it to go.” Right, and by making myself a sandwich when I’m hungry, I’m determining the overall taste I want it to take by adding certain ingredients. This is not production. “But Dr. Dre ‘produces’ beats for his clients.” True. He also oversees the entirety of the songs/albums and makes sure they’re sellable. He doesn’t just make a beat and then tell Eminem that if the song’s a hit he gets some of the money. He writes/collaborates the music and lyrics with the artist, mixes, masters, is in charge of all financial issues, promotion, working with a label (if he didn’t run one himself), etc. And he’s contracted for every song and/or album. Oh, your buddy who’s a local rapper promises to give you a percentage if he ever makes it big? Well good luck to him, and if he does then good luck to you, because if you didn’t get that in writing, it didn’t happen.

A Music Producer is like a movie producer and director combined, as well as a businessman. If you and your friend have created one or a few songs together, and you’ve put plenty of creative effort into them regardless of how good they actually are, then you’re partially there. I know, the more I get into what being a real producer entails, the more you think you’ve done at least enough of that to call yourself a Producer. You haven’t. If you’ve never signed a contract or worked in a recording studio (home studios included), you’re not a producer. Probably not a musician/dj either. Don’t get me wrong, producers don’t have to have much musical or technical talent, they just have to determine how the project is going to sound and make that happen. Then again, every 8-year-old with working knowledge of a computer has come up with something on FL Studio (or similar software). It just amazes/annoys me how many people call themselves “producers” or say that they “produce beats.” By the first definition of produce above, yes, you do. But you’re not a “producer,” so stop telling people you are just to sound cool or like you know something about the music industry. Those of you who do this are “producers” only in the sense that you are full of shit and therefor “produce” a lot of hot air and methane gas. Now, I’ve had a lot of coffee today, so excuse me while I go “produce” something in the bathroom.

Hear my song about producers here. Featuring Zanna on vocals, I used FLStudio to make sure this sounded like your average generic SoundCloud trash. 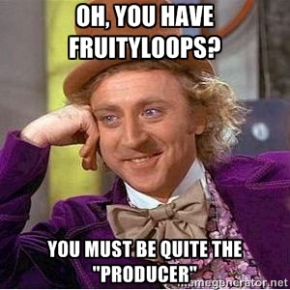